Below are some of our hounds, residing with us or with friends. Please click on the linked names to view the pedigree of each dog.

Whippet boys owned by us or living with friends... 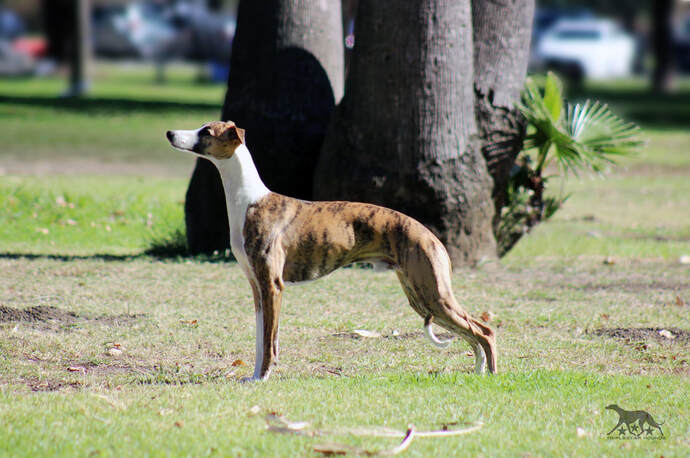 AKC American Champion TripleStar Let's Do The Numbers
(Taejaan Chained to the Rhythm x CH TripleStar Tethys Moon)
This striking male features an exquisite head piece and body with flowing, deep curves. He finished his championship with 3 major wins, including multiple wins over champions from the classes! We are excited to exhibit him at select shows as he continues to mature. 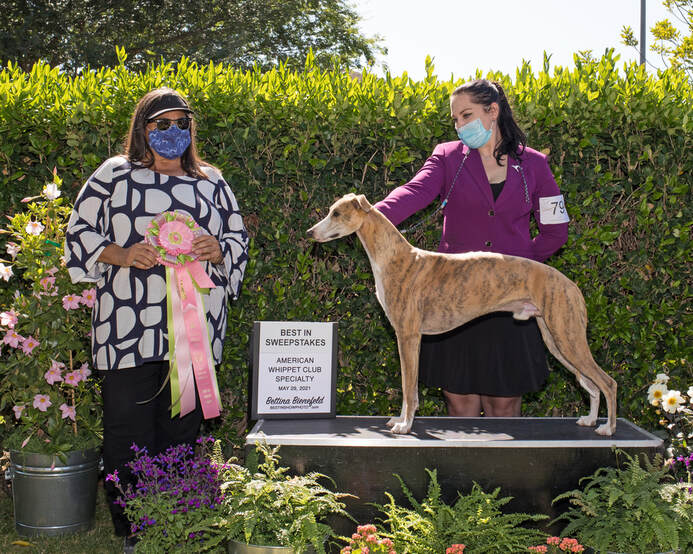 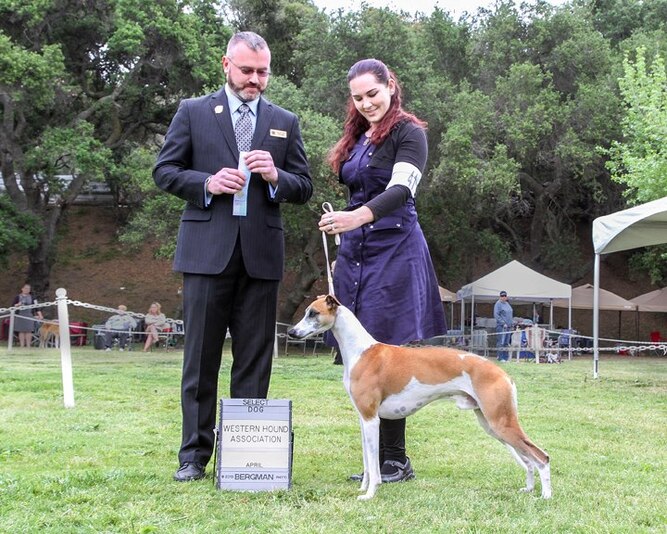 Remi is our little red rockstar! The pick male from his litter, at the young age of 9 months he won a 4 point major at the Hound Classic shows under Mr. Anthony Lord Edwards (Ireland). His AKC Championship contained notable wins, including 3 majors. He finished with a proud 5 point major (21 male entry) at the prestigious Kennel Club of Palm Springs show to start the new year of 2013 under Ms. Joy S. Brewster. His accomplishments are exclusively owner-handled with pride in tough California competition. I thank breeders Sherry Hamilton and Kelly Riney (Festiva Whippets) for sharing this handsome and powerful, clean moving boy. For a person into correct structure with elegance, he is a real treat to behold. Remington is major pointed on the AKC lure coursing field, too! (OFA cardiac-echo Normal & Eyes Normal)  His cardiac echo at over 9 years of age tested NORMAL. 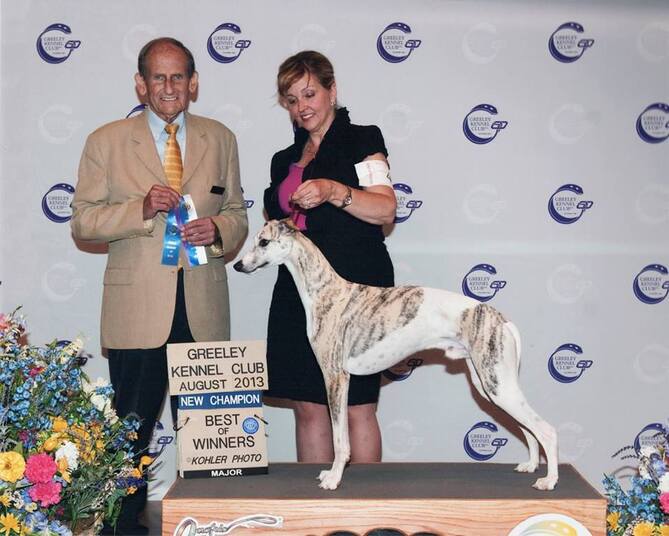 Ruger is all boy with deep curves and clean movement. He was the pick male of 4 puppies from our first litter "The 4 Pistols". He made me very proud by going winners dog and puppy group 4 at his first show, breeder handled! With Best of Breed and Best Opposite to breed wins over specials from the classes, he finished his AKC Championship at just a month over a year old. His third major win to finish was awarded by hound specialist Dr. Robert Indeglia. He was lovingly presented by our friend Cindi Staab Gredys of Jubilee Hounds for the remainder of his title while I finished my own "championship" in college. He shares a special place in our hearts as our first home-bred Champion. His registered name says it all and we are proud to share him with our good friend Vanessa Taylor (Kanati Kennels) in Australia! (OFA cardiac-echo Normal & Eyes Normal)

Whippet Girls owned by us or living with friends... 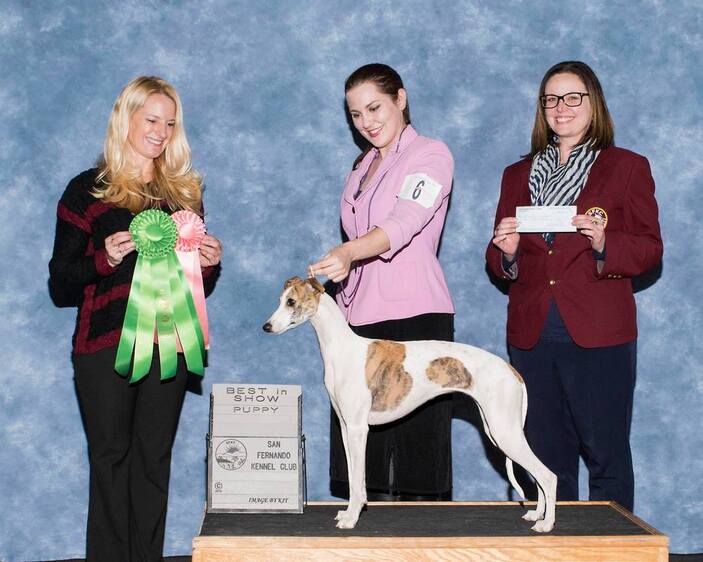 Tethys is a delightful personality with elegant features. She brings joy and a smile to all who meet her.
She was awarded Best Puppy In Show at the San Fernando Valley Kennel Club in 2018, thank you to judge Heather Stevenson Kelly! We look forward to her promising future as she matures. 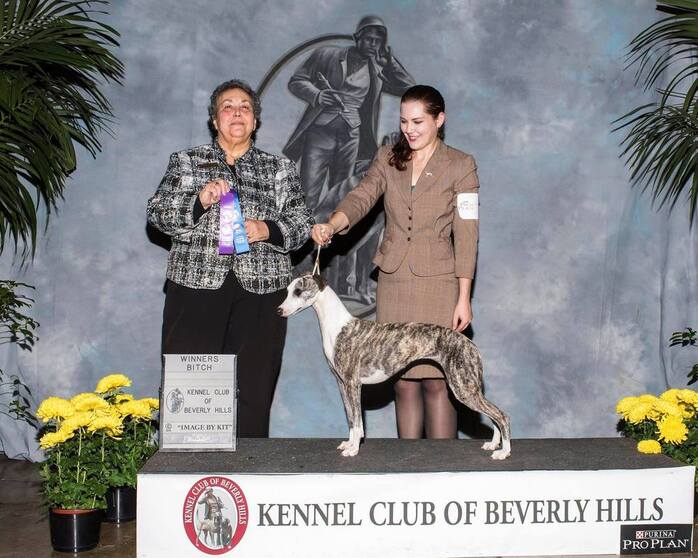 Liza exhibits an incredibly smooth outline with effortless movement. Her head piece is a picture of perfection with strong jaws and large black eyes. Her pedigree features many fantastic and accomplished dual purpose whippets. She was bred by our friend and mentor Susan Vernon of Summit Whippets. Liza started her show career in Southern California picking up a few points owner-handled. She later went on to finish her AKC Championship within less than a month at age 3, expertly presented by Ashlie Whitmore! 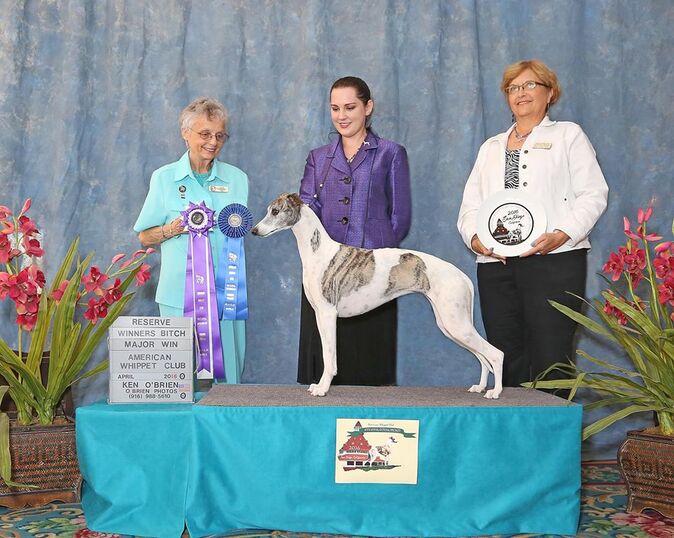 This sweet daughter by our Ruger lives up to her pedigree, she just loves life and pleasing her people. She has never met a stranger and handles everything in stride. Thank you Cindi Gredys for believing in her sire and making this lovely litter possible! She finished her AKC Field Championship on 5/15/2016 by winning Best of Breed over Specials for a 4 point major. This great finish came just weeks after a fantastic American Whippet Club National Specialty 2016 where GG was awarded 1st in Open and Reserve Winners Bitch for a National conformation Major by breeder-judge Dr. Barbara Henderson of Whippoorwill Whippets! We could not be more thrilled with this powerful and elegant do-it-all girl.
(OFA cardiac-echo Normal and Eyes Normal) 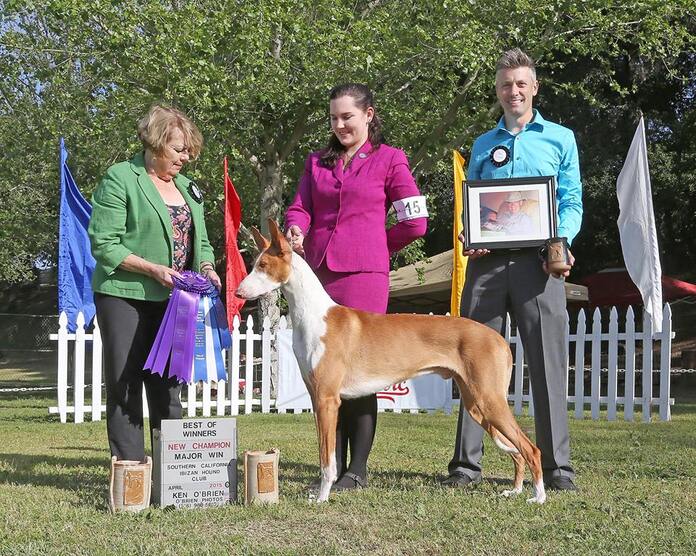 Billy the Ibizan hound was bred by Michelle Paulin and Stephanie Paulin of Ahram Kennels. He is such a cool hound! We are having a blast raising him and preparing for lure coursing and show. He attained back to back majors from the puppy classes and 2 more majors to finish his Championship. His finishing major was at the Southern California Ibizan Hound Club 2015 specialty at the Hound Classic for a best of winners 5 point major under respected breeder-judge Ms. Luane V. Williams of Five Alarm Kennels! We could not be more thrilled. 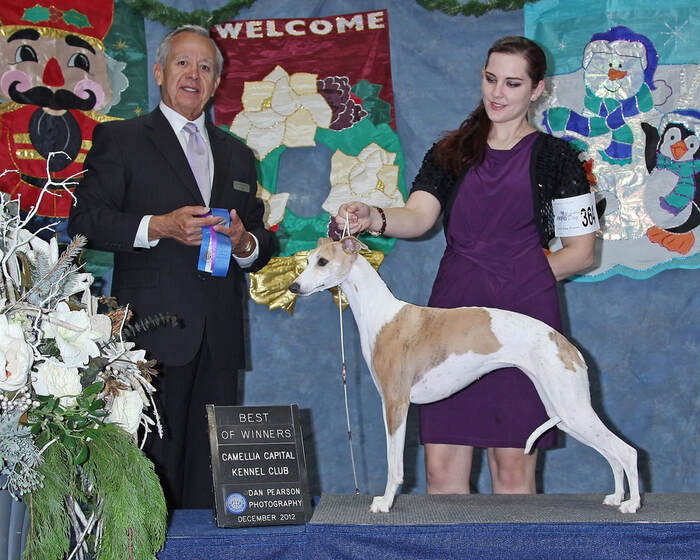 Francie is from the late great Redford, this curvey girl has impressive movement and attitude that is hard to overlook! She is AKC Major Win pointed and selectively shown. We thank Dr. Suzi Fosnot (Winway) for allowing this fun girl to join our family. She is loved and owned by Dr. Christopher Farrington of Mt.Wilson Observatory where she keeps watch over Los Angeles and the stars beyond. On 5/23/15 she was awarded a nice major win by esteemed Australian judge Ms. Esther Joseph! After many major reserves, Francie is now happily retired to be cozy in our bed. She will forever be a champion of our hearts and a fantastic piece of our pedigrees and many more through her beautiful, healthy children.
(OFA cardiac-echo Normal and Eyes Normal) 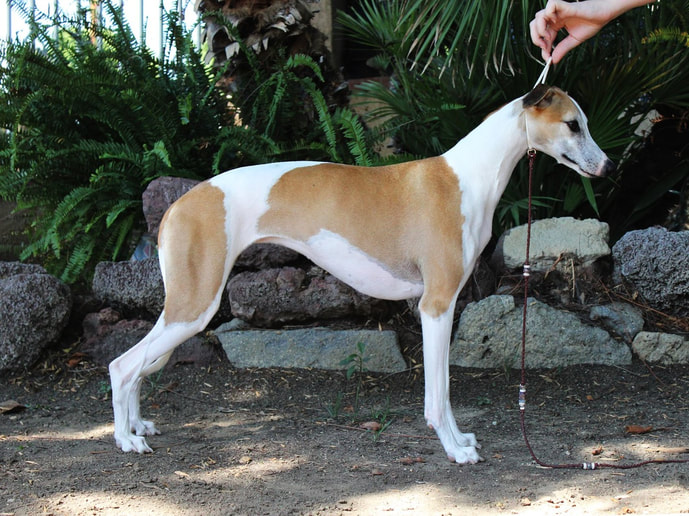 Benelli is very much her father's daughter and shares many of his lovely features. She enjoyed making a stunning brace with her father Remington!  All of her AKC points were won from the Bred-By class with her finish from Open at the Western Washington Whippet Association Specialty 2017 under Breeder-Judge Doug Broadfoot of Broadstrider Whippets. She is our second bred-by champion and is happily retired to the couch.
(Benelli is OFA Cardiac-echo Normal and Eyes Normal) 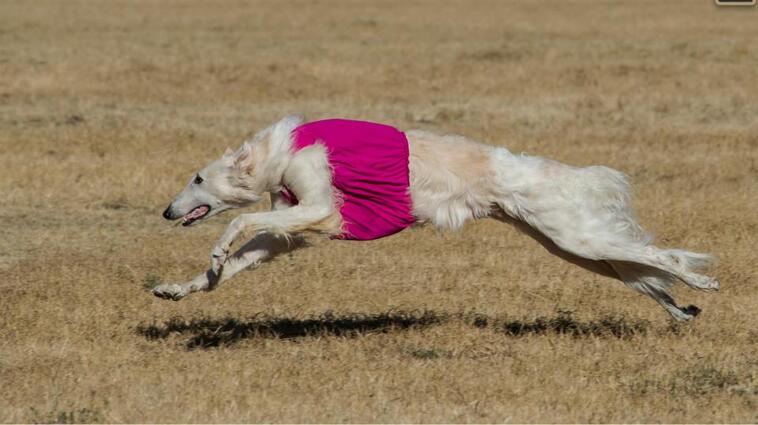 Although not residing with us, we proudly co-owned and campaigned the Borzoi Evarest to his AKC Field Championship title. He easily broke into the top 20 AKC Lure Coursing Borzoi and was often a point shy of winning best in field. The hot southern California weather was hard on him so he happily resides in northern California with his primary owner, Marcella Zobel of Go Lightly Borzoi. He sired a lovely litter out of GCH / Intl Ch. Golightly Valinor's Beau Monde, JC and several of their get are AKC pointed from the puppy classes (Full dentition, Eyes Normal, OFA Cardiac normal, N/N clear of DM Thyroid normal)
All content displayed on www.triplestarhounds.com is ©TripleStar Hounds / Shauna Summers and associates. No content may be used without written permission.